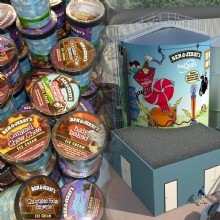 Unilever and Paques just finalized the construction of a bio-digester at its Ben & Jerry’s ice cream factory in Hellendoorn, the Netherlands.

After a successful test period, Unilever has opted for a new type of bio-digester from Paques, the BIOPAQ®AFR, in which natural micro-organisms (in this case more than 24 billiard (24•1015) little bugs!) ‘eat‘ waste products and convert them into biogas. In this system, wastewater is purified by converting waste products from ice cream production such as milk, cream, proteins, syrups and pieces of fruit into biogas.

The BIOPAQ®AFR is an innovation in the field of purification of fat-containing wastewater. What’s unique about it is that wastewater streams that contain fat and oil are treated/digested in one compact reactor, together with degradable particles, whereas in conventional systems this is only possible by going through a number of processing stages.

Unilever is one of the fist companies worldwide with such a bio-digester.